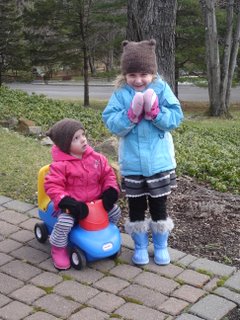 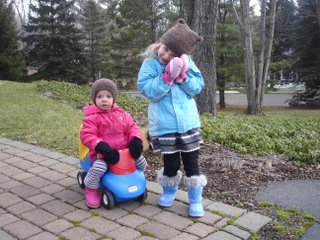 Daddy (me) is around the house a bit too much these days, I think. This week it feels like we're running a boot camp for unsavory, motherless, heathen Gibbons. Anytime I am not dressed in slippers and pajamas Emma, unsolicited, says "Bye!" with great gusto. I try not to be offended by anyone under age two (or anyone under voting-rights age, as a matter of fact). Sadie's once-cute recent obsession with all things princess has in these latter days taken a turn toward the type of princess-ism we reference with air quotes and a roll of the eyes. At her school next week, Sadie is scheduled to be "Star of the Week"...so maybe she's just getting warmed up. As part of the 'Star' week, she provides some insight into herself for the rest of her class, such as favorite food (mac & cheese), favorite color (pink), why she is special (she can jump really high and she is really fast--although not as fast as Audrey, she says). She gets to take show-and-tell on Monday, and she wants to take Emma. On Thursday Sara will go to class with her, and will read a book of Sadie's choosing to the class. The current choice is "Clifford Goes to Hollywood" (don't worry, Clifford sees the light, and at the end of the book returns home for 'true love'), but that will likely change.

I have been hitting the YMCA a lot lately in an attempt to get back in fighting condition (lest I be attacked by ninjas while going to work in NYC). I was rocking the treadmill for a couple of weeks, until my right knee started feeling a bit wobbly, so now I'm on the bike for a while. The goal is to get back into a basketball league, and this time avoid snapping any major tendons like I did two years ago next month. One thing I enjoy about the YMCA in 2007 is that, with a pair of good ear buds, you can burn 600 calories and simultaneously learn how to remodel a family room for less than $1,000.

Speaking of which...we keep adding new projects to our home fix-up list. The latest plunge we took was to purchase new flooring for the two downstairs rooms that have old, ratty carpet. Mid-winter is not the best time for a flooring project, but we had a little time, and when one is house-bound one tends to notice how really ratty that carpet is. We will try to remember to take a before picture, so the after pictures will be more impressive.

I need to throw away the napkin I wrote this Sadie quote on, so here is a random one to help you confirm how much of your imagination you have lost since you were 4 years old... With about a third of her cereal left floating in her bowl at breakfast one morning, Sadie got up on her knees in her chair (against the rules, by the way), gazed into the bowl, thought for a moment and said: "Look at this creation with Kix. It's a dragon leaning over a couch."

A few of my favorite things (people)

Cold days in New Jersey means enjoying some couch time. These girls love their Mama, and can't stand to be outside of arms reach of her.

This morning we had some snow outside to ooo and ahhh over. After breakfast we went out to play in it before it melted away. There was enough to make snowballs, snow angels and tracks. We used up the snow on the driveway and headed across the road to the sidewalk where the shade provided ample amounts for more snowballs, angels and tracks. Then we loaded the wagon up for a walk down to the bridge to see if there was ice over the stream. The temps have not been too cold so there was not any to be found until we headed over to the the river. Sadie made a snowball and carried it on our walk, talking about how she was going to put it in the refrigerator so it would last ten years. I made a ball for Emma to carry as well and when we reached the river she decided she wanted to throw it into the river. After one attempt and a miss, she thought it would be better for me to throw it in. After, we watched it float down stream and slowly melt away. It was a nice walk, the snow lifting everyone spirits enough to avoid all the usual whininess the accompanies us most of the time. It has been a lovely day so far, without of all the usual "to and fro"-ing. 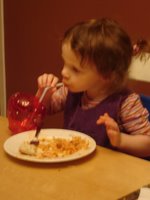 Check the sweet pony tail. So so so so cute!

Yesterday we had a bit of snow. For about a half hour a few flakes floated about. It was like some giant picked up New Jersey like a piece of toast and decided it needed a little salt and then it was over. The cold has stayed around though. We have high thirties today but the weekend promises to be warm again.
Today Sadie had sports class after school, this month is all about soccer. Emma really wants to do everything Sadie does and today on the way to school she insisted upon bringing a book bag with her. She even toted it to class. Emma agrees that she really would like going to school as well.

We have had no snow this season so far. But thanks to Christmas, we have plenty of packing popcorn to make our own. Notice the t-shirts the girls are wearing in the 60 degree weather. Today the mercury might hit 70.

Just when you start thinking your first child is intelligent...